Studio Peak! This is an IKEA shelf I recently installed above the pegboard that sits on a side counter. It holds MOST of my Prima flowers! I haven't finished putting the flowers in the Starbucks Frappuccino bottles (holding star box up). I am really not sure I WANT to put flowers in them - it might be hard to get them out!

Don't you love the color of the walls? It's so cozy-feeling. It's kind of a mauve/rose color. Hard to describe. The color shows a little pinker than it is on my monitor. I like Victorian colors and styles. The room was white but I just could not handle white walls again! I just went to Lowe's, picked the color and went for it all in one day. I do love it! We've been here 8 years now and I still do.
Posted by Brenda Whitehead at 8:03 PM No comments:

Clapotis Came Out To Play

Wheee!! The weather was chilly this morning so when I went to knitting, my favorite wrap got to go too! This was my first Clapotis (I made 3 total so far) and I used multiple colorways of Silk Garden (Noro). I love this wrap! People keep wanting to buy it - no way! 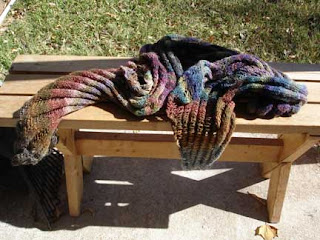 I also wore my green "Pucker" top, my skinny green scarf AND my sock earrings! After knitting I ran some errands and some dude (read hippie-type-white-beard-santa-claus-looking-dude) started talking to me about the earrings. That's a nice memory for the first nice Fall day! Fun!

There were some other compliments as I went along. Makes you feel good when people notice things you do. I had a Sonic burger and ONION RINGS for a late lunch and then went back to work in the Studio. Making some nice progress! More about that later.
Posted by Brenda Whitehead at 12:48 AM No comments:

I knit this little scarf with left-over Ritratto yarn and #8's.
I had made a shrug from Jane Thornley's recipe and have lots of greens left. It was quick and easy to make and the pattern is available  in PDF format on Ravelry. Click the button in the sidebar!
If you're not on Ravelry, click here for pattern.
This can be made with any yarn, any size knitting needles.
I like it unblocked. See details on my Ravelry page. I forgot to put the green shrug in my Ravelry - have to do that! I think I missed some other things, too. Grin
Posted by Brenda Whitehead at 10:43 AM No comments:

This is the smallest baby gecko yet this year! Found him in the bathroom about 4am. I have this habitat left over from the boys' young days and I use it to put the lizzies in until I can put them outside in the eclectic garden (hubby has odd things in his garden - like a Barbie car heehee!) The pencil is for size comparison. He's more curious than scared, unlike his cousin a couple of days ago. THAT one wanted to do nothing but escape! Had to chase him 3 times - luckily it was daylight, so out he went immediately onto the Barbie car! I don't want to terrorize these little guys! Btw, the Barbie car is full of food for them - tiny spiders live in it mostly. I wonder if lizzies can see color? The car is RED and when I put them down, they always head for it!
Posted by Brenda Whitehead at 10:31 AM No comments: I have cleared an area - about 1 square foot - on my desk (actual desk, not virtual) for my Zentangle box and my pen box. This area is JUST for a ZT in progress! I plan to keep one in progress in the spot all the time. It encourages me to ZT and keeps the space just for ZT. If I don't have a square or ATC in progress in the spot, I will put STUFF there. BAD.

We have a disease in our family called " flat-surface-itis". ANT flat surface is subject to infection! We also have "Pile-itis". And the piles just sit on the flat surfaces for indefinite time spans.
I haven't QUITE got the cure figured out, but some things help. If I give my DH a basket - and designate it for "stuff" he will use it. However - when it gets FULL it tends to breed OVERFLOW. UhHUM.

I point out how EASY having a task basket makes GATHERING (yes, another disease) stuff to be put away. It's the actual PUTTING AWAY that is the problem at this point. Do you think anyone would EVER consider putting objects away to begin with??? My excuse for this is - I'll get it LATER, I'm too busy right now (translation = I'd rather do ___ than take the time to put ___ away). Too easy a habit to fall into.

Yes, we are collectors of STUFF. (Which puts me in mind of George Carlin's "stuff" bit - very funny guy. He is missed). We outgrow our designated spaces and then pile UP. We (and mostly I mean "I" here) - am terrible about collecting - DH calls it pack-rat-itis - and my Dad was worse! We have so much STUFF there is not enough space to store it. We have garage sales but then we see something "shiny" in the stores and home it comes. (Again reading the "we" as "I").

Since we down-sized our house several years ago, the amount of stuff is less out of necessity, but it creeps up on you. Now, my DH can be just as bad about the diseases. He doesn't collect as much "stuff" but, his piles are awful! It's paper, it's coins, it's more paper. I'm still working on this habit he has of keeping ALL the mail (including envelopes) in piles. He has a designated BOX for his stuff - keys, phone, etc - on a table by the door. However, the WHOLE TABLE (lamp? what lamp? porcelain rose? what rose?) has become PILED. (there's a table?) LOL!

Now, I AM an organized person. As long as there is a spot to put something, it will go there. Even if that is "eventually" - once the "pile" it comes from gets too far out of hand (as in falling over/off).

I must admit I am the worst of us. I love to collect art supplies. Even those things that most people do not consider 'art supplies'. Rusty metal pieces, rusty bottle caps (used in collage/assemblage), old books with no covers (used for text clipping), old tinkertoys, boxes of dominoes (necklace pendants), bag of old eyeglass lenses (thank you optometrist), well, you get the picture. And you can't just throw this stuff out because you never know when you might want to use it in an art piece. I just try to contain it all in my Iris Cart or Alex cart drawers. And fail at the attempt. More about the Studio space later.

I read this thing once and heard it on TV, too - SOMETHING OUT BEFORE SOMETHING IN. I do try, but it doesn't always work! In fact, it hasn't been working AT ALL. Yarn just seems to follow me home all by itself..... At least it's not CATS.

Now I admit - finishing some of these projects would help. More about this later, too. Right now, FALL is coming and I feel the URGE TO PURGE coming on! Time to fill trash cans and boxes to go!
Posted by Brenda Whitehead at 10:59 AM No comments: