I am still building things and I love it! I finished the Keys 4 Art Cabinet (Kathy Orta design-Paper Phenomenon) and here it sits on my desk. It holds my Zentangle supplies and sketchbook on top! Molie or Handbook fits perfectly in the tray.

I made a drawer instead of mini albums. the drawer holds my pens and reading glasses. I've needed something functional to hold this stuff instead of keeping it piled (because I inevitably stack stuff on top and have to move something -bad, bad, bad!). 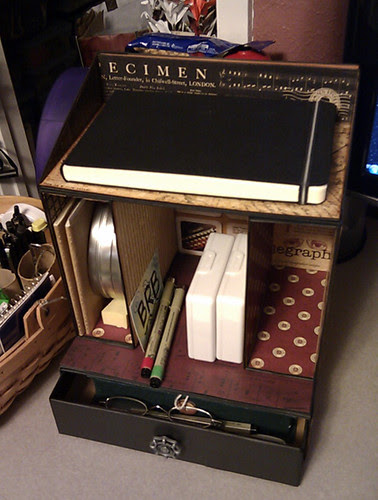 I used the Graphic 45 "Communique" paper collection. The bottom panel under the center section just has a paper laid there. It fits under the two side "boxes" because..... wait for it....

I put the whole thing together with VELCRO! That's right - all the pieces are put onto the backing board with Velcro! My brilliant son came up with this idea when I was stalling about putting it together. I wanted even more versatility and this gives it to me. I can make more pieces and switch them around - what fun!
The Gasp Pump is almost complete - still working out the top part before putting everything together. The mini albums and drawer are complete. More about this later when it's all finished! But here's a peek at the minis in the drawer: 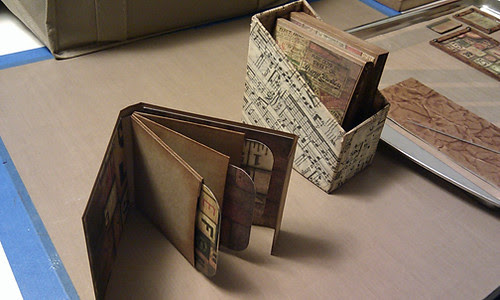 So - yes - once again Life gets in the way of the blog. When things get overwhelming one of the things that gets put aside is the blog. Poor blog.

I have not stopped doing artwork just because life got really busy. I have just stopped posting about it! Photos have been taken, journaling has been done. Everything is on a hard drive. I am behind on projects but that will even itself out eventually. No stress! My Flickr account has suffered as well - updates are waiting to be done there too. I know by now that trying to play "catch-up" does not work. Time to just move forward!

The things I have been working on lately are mostly related to making mini albums and "building" things. Designs by Kathy Orta have caught my attention and recently I have finished (for the most part) two of her projects. I am loving joining her live classes on Ustream. Kathy and the PITA BABES (of which I am now a proud member) are very entertaining!

The first project is called "Art Canvas Mini" and consists of a 12 in. x 12 in. canvas upon which "shelves" are built and a mini album is attached. I had such fun making this! I intend to put our California Redwood vacation pictures in the mini. Choosing the pics will take time - I take TONS of photos! The only thing I have left to do besides pics is a little embellishing in the shelves and top of canvas (still undecided LOL). Perhaps in our memorabilia from the trip I'll find just what it needs. 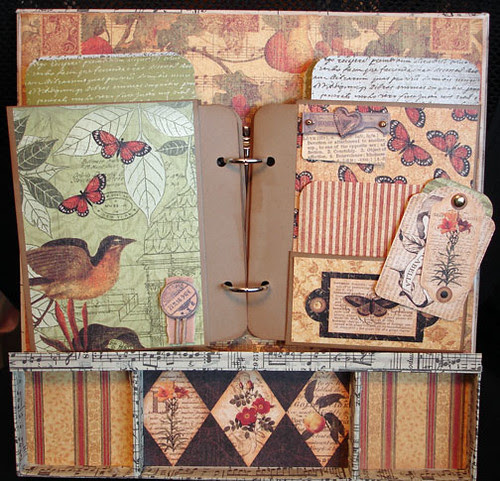 The second project is the "Contessa Attache Case". I finally found a project I could use my hoarded - errrr... TREASURED Graphic 45 'Steampunk Debutante' collection for! I absolutely LOVE the design for this case. I have taken it as far as I can without putting it into further use to see what other elements I might like to add. 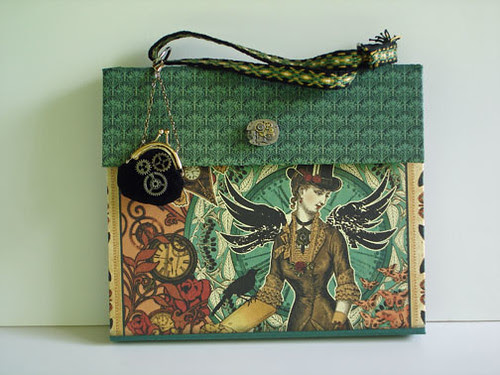 The second and third inside panels are made as Kathy did, but I added a notepad and pen holder to the first panel. I used a strip of paper reinforced with packing tape and raised a quarter of an inch to hold folded back pages of the notepad and a pen or two. I put this on the first inside panel because of the way Contessa folds back on itself - a really cool feature! It allows me to use the notepad with Contessa all folded up! After using the notepad for a while I realize I should have made a second strap for the bottom as the pad slides a bit sideways. Note to self for next time!

The clasp is magnetic with a steampunk decorative element I made from old watch parts to cover the tabs that hold it in place on the outside flap.I made a "charm" to hang off the D-ring handle from a doll purse and stitched on some gears. I will keep a pencil sharpener in it for now.

I made a Handwoven strap from pearl cotton thread in just the right colors using Tablet Weaving (also called Card Weaving and yes, does use threaded cards to manipulate the colors in the weaving). The strap is reversible and is my own design. The way I made it allows for two lengths of handle - held double or let out so it's a tad bit longer. 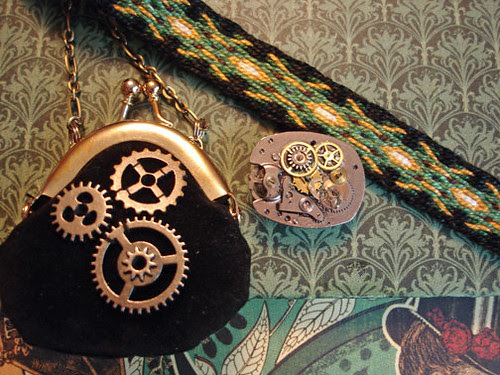 Contessa also hangs nicely from a hook by her strap! She is close by the desk (Iris cart under one end) but takes up no surface space! Gotta Love it! 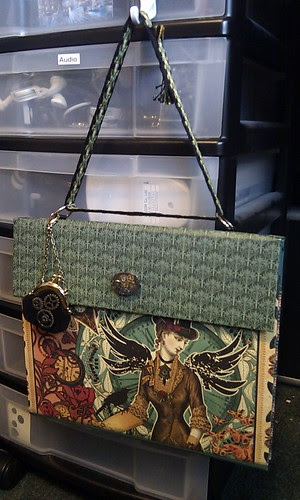 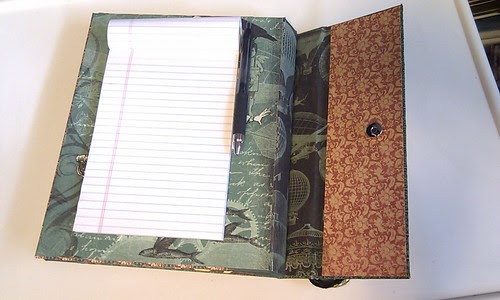 My next project is also by Kathy - the Gas Pump! It's the cutest thing! Love Kathy's projects and her tutorials are very well written. I am also in her Summer Kit Club (Mother's Day gift from the guys)! Can't wait!
Posted by Brenda Whitehead at 2:12 PM 4 comments: